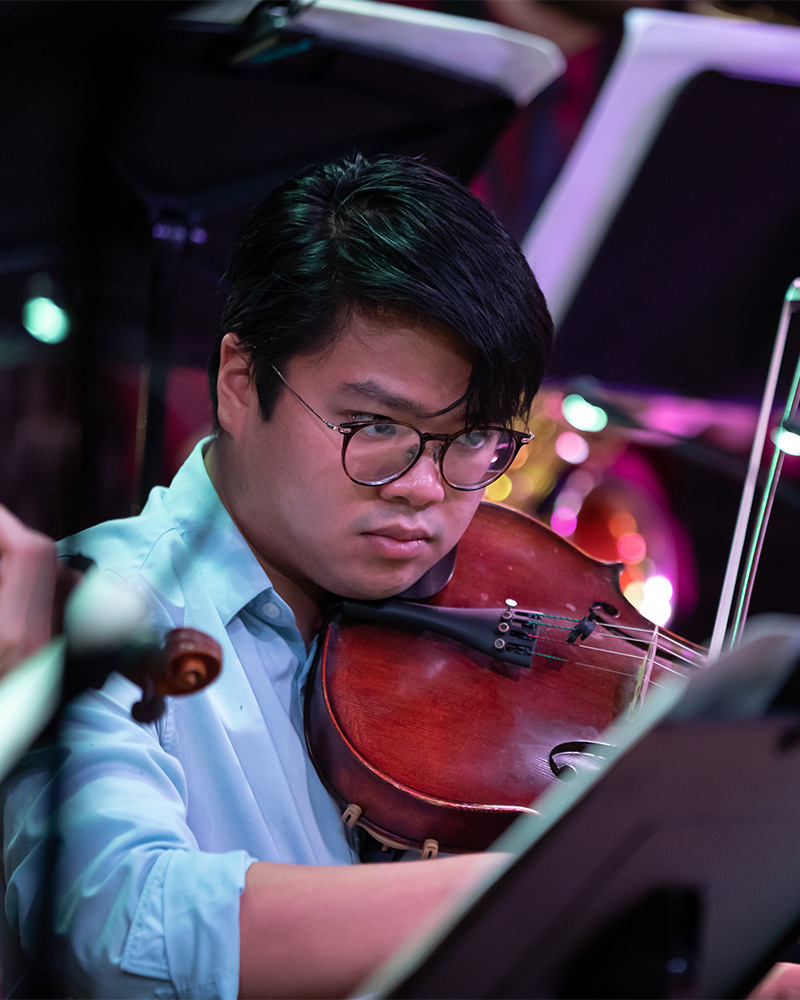 Masks are required at all times for all patrons and visitors regardless of vaccination status during all indoor performances taking place at Shenandoah Conservatory. Masks must be worn in the lobby, inside the theatre/concert hall and in the restrooms.

Performing artists will perform unmasked only if they are fully vaccinated and have tested negative for COVID-19 within 72 hours of their performance(s).

Harold Meltzer (b. 1966): Selections from Rumors

Winner of the 2021 William Averitt Prize for Excellence in Composition

for two percussionists and electric piano, 8’

Cradles is a utopic lullaby, to help put treasured analogue musical equipment to bed. The work takes its inspiration from the sensuous, tactile relationship between a performer and his or her instrument.

With the title Rumors I pay homage to my teacher Martin Bresnick and his work Conspiracies for multiple flutes. He derived his title from the Italian conspirare, meaning to breathe together, yet in English conspiracies suggests something different and more ominous. Similarly, I derived the title Rumors from the Italian word rumori, meaning sounds or noises. The four pieces in my set, each composed for a different member of the flute family, evoke sound or noise worlds unusual for a flute.

Focus Group for piccolo focuses on material from a brief passage in Trapset. Except for a group of notes that spurt into the texture, most of the notes are blown with unfocused air. (1’)

Vixen was commissioned by the Grand Valley State University New Music Ensemble for its National Parks Project, with support from the National Endowment for the Arts. During the early planning stages for this music, which is based on Yellowstone National Park, I came across the Yellowstone Sound Library, a wonderful online resource that offers a wide range of field recordings taken throughout the park. I was especially drawn to the sounds of the various geysers, and the Vixen geyser in particular caught my ears because of its interesting eruption pattern. It has a very rhythmic, punchy explosion, with a surprisingly mellow, gurgling finish as the water it just spewed out drains back into its crater. I decided to make the shape of the eruption into the form of the musical composition — the first three-quarters of the piece have a driving, relentless pulse punctuated with fits and starts, and then the rhythmic material slams to halt, replaced by gently overlapping layers of extended tones and bubbling trills that slowly disappear into thin air. Of course it was impossible to resist using the name Vixen, which is perfect given the geyser’s unpredictable, spitfire disposition.

Bury Me Not is a piece for percussion quartet which was composed in May of 2021 for a student reading at Shenandoah Conservatory (Winchester, Virginia) done in collaboration with Sō Percussion. It creates interplay between post-minimalist style percussion writing and the traditional old-time prairie tune Bury Me Not on the Lone Prairie.

In DBR’s Filter, the violinist moves the bow as close to and as far away from the instrument’s bridge, effecting the “high/low pass” filter found on most DJ consoles or mixing boards. The amount of “filtering” is determined by the performer.

to quiver is to tremble with fear or emotion.
it is also a case for arrows.

i wrote this piece during a time in which i realised that
every woman i have ever known has been sexually harassed or assaulted.

this piece is for every woman and girl who has felt afraid and who has turned —
or who will in time turn —
that fear, anger, and distress into
a case for arrows.

This piece was inspired by an interview with Oprah Winfrey which she quoted:

I have felt the presence of God my whole life. Even when I didn't have a name for it, I could feel the voice bigger than myself speaking to me, and all of us have that same voice. Be still and know it. You can acknowledge it or not. You can worship it or not. You can praise it, you can ignore it or you can know it. Know it. It’s always there speaking to you and waiting for you to hear it in every move, in every decision.
— Oprah Winfrey, May 25, 2011

Unremixed was written for Alarm Will Sound's debut at the Lincoln Center Festival in 2005. The purpose of the work was to create a finale for the concert, which was the complete presentation of Acoustica, an album of Alarm Will Sound's arrangements of Aphex Twin's electronica. The work integrates several ideas from Aphex Twin's music as well as instrumental techniques used in Acoustica arrangements to imitate electronic sounds.

The work is divided into four sections. The first features the descent from Gwely Mernans presented in various ratios against a consistent quarter note pulse divided into sixteenths. A lick similar to the pentatonic figures found in Cliffs emerges, played in different meters against the pulse.

A bombastic percussion solo leads to the second section which places a firm 5/4 pulse against a tune formed from two phrases of 10/16 that change their division of the meter. Though not directly taken from the music of Aphex Twin, the tune is reminiscent of many modal funky grooves found in electronic dance music. Eventually it is placed against the descent from the previous section.

The third section attempts to capture the industrial sound of electronica. The tune from Meltphace 6 emerges over a 7/8 groove whose working title was “Sick Machine.” Various layers are added to the texture to grow towards a giant climax.

The final section is a simple dance party featuring techno drum tracks that grow increasingly complex and a sped up presentation of the mixed meter dance tune from the second section. The performers are encouraged to get a little rowdy towards the end.

Samuel Harrison Bradshaw
Bury Me Not

Shenandoah Conservatory is grateful to the 2021/22 Dean's Circle members for supporting our creative community of artists, scholars and educators.

To learn more about joining the Dean’s Circle and the other ways you can make a transformative gift to Shenandoah Conservatory visit www.su.edu/performs/support or contact:

Shenandoah University is a 501(c)(3) nonprofit organization. All gifts are tax-deductible to the full extent of the law.