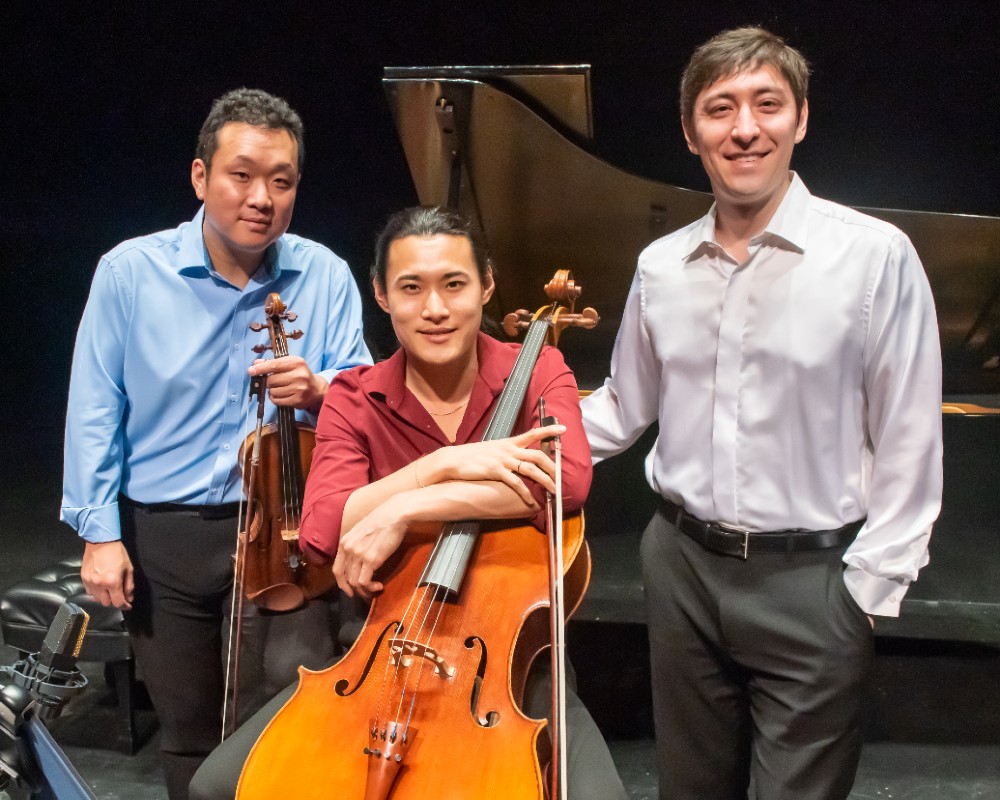 Trio Barclay: Mendelssohn and Seyfried
About the Show

This performance will include a 15-minute intermission.

Edward Downes writes “posterity has never quite forgiven Felix Mendelssohn for being happy, [an] offense … compounded by his being rich [in funds, friends, and family affection]. …He suffered none of the agonies or the flaming passions of Berlioz, Chopin, Liszt or Wagner; on the contrary, he was a model of bourgeois propriety.” This popular perception of Mendelssohn has been challenged over the years as an idealization, but it has nonetheless persisted. Whether true or not, Mendelssohn’s seemingly charmed life was cut short by a series of strokes which led to his death at the young age of 38.

From a purely musical perspective, Mendelssohn’s work, by and large, does seem to confirm Downes’s view: though it exhibits the romantic feeling and sentiment typical of the early 19th century, these feelings are always perfectly balanced by an Apollonian classicism (thanks in part to Mendelssohn’s rigorous musical training, begun early in youth). And if one believes that an artist’s work reflects their personality, it’s not hard to imagine Mendelssohn as a man abounding in elegance and charm—think of the opening of the Italian Symphony or the finale of the Violin Concerto.

And yet, a dark, fiery streak can also be found in his music. A case in point is the first movement of the work on today’s program, the Piano Trio No. 2 in C Minor, in which the Italian term “con fuoco” is written as an indication to the performers to play “with fire”. The surging, pulsing opening melody—the embodiment of agitation—sets a mood listeners would more likely associate with the music of Mendelssohn’s temperamental forebear Beethoven (so much for the lack of “flaming passions”!). However, before long, we hear a lyrical idea, hopeful in outlook, that is more like the Mendelssohn we imagine. The opposition of these two melodies forms the crux of the drama in this movement. About four minutes in, Mendelssohn begins playing the two ideas against each other: he answers one with the other; he tries to exchange, or sometimes meld, their fundamental characters. Near the end of the movement, the anxious, fiery melody seems to have won out. But apparently that victory isn’t enough; the hopeful tune appears for a final time, transformed now into wailing, desolate sighs. The movement ends in a defiantly dark mood.

Fans of chamber music are more likely to be familiar with Mendelssohn’s earlier trio (No. 1 in D minor), which Robert Schumann rightly called “the master-trio of our time.” But the second movement of this second trio does much to make the case for the latter’s equal or even surpassing greatness. The music is ineffably tender; it is an intimate scene between lovers. At first, the piano offers music of great contentment; even moments of doubt are followed by reassurance. The violin and cello (the lovers, perhaps) reciprocate. Eventually, the cello initiates a darker middle section with a melody posed as a question. This leads to an extended, searching dialogue between the violin and cello. At last, the lovers reach an understanding: the contented music returns, but now with greater certainty, greater joy. One last doubt is expressed by the piano, while the violin and cello together hold a single long note—the partners holding onto one another to weather the storm. They make it through. The sun emerges and the scene closes with the lovers’ embrace.

Anyone familiar with the Octet or Midsummer Night’s Dream will be familiar with Mendelssohn’s “fairy music”—sparkling, dark-hued music, fireflies dancing in the night. It is this mood Mendelssohn evokes for the effervescent third movement of his trio, which serves as an interlude—a break from the high drama of the surrounding movements.

The finale is the dramatic apex of the work, beginning with a first theme that is swashbuckling yet aristocratic (again, we are close to Beethoven’s territory). But soon, a contrasting second idea is heard. Announced in the violin and cello, this optimistic, determined idea can be mistaken for no one other than Mendelssohn. Following another statement of the opening theme, we then have something completely unexpected, which, to understand better, requires some background.

Though Mendelssohn came from a prominent Jewish family, his father renounced the religion, and Felix (and his parents) were eventually baptized into Christianity. Because Mendelssohn didn’t wear his beliefs on his sleeve, it’s unclear what his own religious convictions were. We do know, however, that Christian hymnody features prominently in his own compositions. And it is at this juncture in the trio that we hear, softly, a “chorale” tune—in other words, a hymn. Borrowing one phrase from a 16th century German hymn (Martin Luther’s Gelobet seist du, Jesu Christ), and a second from an equally old French one (Louis Bourgeois’s Old Hundredth), Mendelssohn goes on to weave them into an original melody that transports listeners directly into the sanctuary of a church.

But soon after this chorale, the initial darker mood of the movement returns. The second melody returns too, but now in somber guise. Then, just as the swashbuckling theme seems to be bringing the music to a close, the chorale tune returns triumphantly, like an epiphany. This is the catalyst for the remaining action: the second tune recaptures its earlier spirit, dashing headlong towards the finish, redeeming even the opening idea along the way.

And so, it is in his music that Mendelssohn seems to have worked out the inner struggles he was so careful to hide from the public (as we know especially from his correspondence with his sister, Fanny). Therefore, perhaps our ultimate image of his personality should be at least as complex as this most beautiful and profound of his compositions.

But this progression of emotions seems more intentional than it was: the movements were actually written in reverse order! And so, it was with a joyful finale already in hand that I approached the writing of the rest. The last, and most difficult, piece of the puzzle was the first movement. When writing it, I struggled to find the appropriate mood. I wrote and rejected two possible opening movements—one seemed simply too lighthearted.

On June 24th, 2021, at 1am Eastern time, a high-rise condominium collapsed in Surfside, Miami. As I’m sure was the case for many of us, my initial shock upon hearing about this quickly gave way to other thoughts. I imagined the anguish experienced by loved ones, the suffering of the victims. Reading about one resident’s experience of hearing creaking sounds from deep within the building the previous evening was (envisioning myself in that situation) particularly terror-inducing.

Since these thoughts weighed heavily on my mind, I eventually came to feel that, despite my reservations, I should attempt to give musical voice to these dark emotions. And so, that is the first movement: weighty, intense, sometimes wailing, sometimes quietly and nervously awaiting an unknown fate. A state of unabated tension pervades the movement.

The second movement boldly shatters the tension, launching into a high-spirited romp. As the movement progresses, the music grows more and more visceral, hurtling us to the edge of chaos only to turn away in the nick of time. It is the music of youth—or perhaps an expression of the vitality of spring. Eventually it spends its energy, gradually calming, and expires in a small puff of smoke.

The third movement is the equal and opposite reaction to the second: the listener is drawn inward. A muted chorale introduction leads to a lyrical and heartfelt melody. Emerging in the violin and answered by the cello, it is simple, serene, and quietly expressive. Soon, however, the cello takes up a more impassioned declaration. A mixture of ardor and melancholy, it could be an expression of unfulfilled love. After an intense climax, calm returns and the piano offers a reminiscence of the opening theme. But as the strings join, the music blooms into full-throated song; what was once inward is now expressed fervidly—a transformation has occurred. The music returns to the hushed tones of its opening, closing in a state of tranquility.

The finale is irrepressibly exuberant. Its lilting primary theme, heard at the outset in the violin, eventually undergoes several variations, even appearing in dark hues, as if to suggest that joy contains its own complexities. Toward the conclusion, there is an abrupt halt, which ushers in a passage that seems to portend something sinister. But it’s no match for the spirit of the movement. Jubilance takes over again and the piece ends in a whirlwind of exultation.